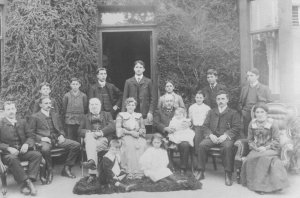 Andrew Paton Gray was born in Keabog Kirkcudbrightshire Scotland on 19 December 1886. He was the eighth of 15 children, 12 boys and three girls.

His eldest sister Isabella took a lot of responsibility for the bringing up of her brothers and sisters. His parents Thomas Gordon Gray, a farmer, and his mother Jessie Smith were married in the Free Church of Scotland. Several of his brothers had careers in the colonies: one was deputy manager of the Indian train service, another one was a tea planter, a third one was a fruit farmer in Australia.

Andrew Paton Gray got a Carnegie scholarship and studied medicine at Aberdeen University. He met his wife Louise Henriette Destips, from Lyon France while he was still a student. Louise came to England to work as a French Assistante in a girls' school in Chesterfield. She went to spend one of the school holidays in Scotland at the home of one of the Sixth Form girls; while she was there she fell and sprained her ankle. Andrew was called upon to administer first aid. They were married in Paris in 1916.

He obtained his first position in Dunfermline. While he was there he contracted nephritis and was advised that a long sea voyage would aid his recovery. He therefore joined a ship going to the Far East as a ship's doctor. During the journey he was unfortunate enough to be bitten by a monkey, the pet of the First Officer who used to entrust the monkey to the doctor while he was on watch. As a result of this he had one finger that was shorter than the others.

When he returned to the UK he came to Sileby to join his brother who was already practising as a doctor there. When the First World War broke out they realised that one of them would need to volunteer. It was Andrew who went and served as a Field Doctor in Northern France. He was buried alive for three days as the result of an exploded shell. His best friend, who was with him, died before they were rescued.

On his return from the war he bought the Chestnuts in Beveridge St and established his medical practice there. He lived at the Chestnuts until his death in1963.He and his wife had two daughters Marie and Eva; Marie became a French teacher and married John Hardy Smith, a shoe manufacturer. Eva trained as a doctor at Aberdeen University, specialising in dermatology. She married James Shirreffs who was also a doctor.

Dr Grey was a traditional village doctor: he knew his patients well and was always available. He had a speaking phone installed by the front door at the Chestnuts, so that if someone rang the bell at night he could talk to the caller from his bed and so respond quickly to them.

He was a very keen gardener and bought extra land behind the Chestnuts to grow more fruit and vegetables. This land was eventually compulsorily purchased to form a playing field for Hall Orchard School.