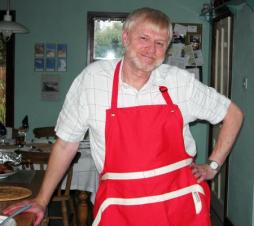 Arthur Gardner was born in a small mining village, Delves Lane, near Consett, County Durham. He attended Hull University in 1961 and graduated in Psychology in 1964, joining the Scientific Civil Service as an Occupational Psychologist, working mainly with the Royal Navy.

One of the greatest influences in Arthur's life was poetry and words. He met his wife, Gill, at a poetry club in 1966. They lived in west London, later living for 3 years near Cambridge and renovating a run-down house with a wild garden with their 3 children, Ben, Jess and Josh. It was there that Arthur developed a love of gardening and nature.

Later, Arthur was seconded to Loughborough University, writing a handbook on Human Factors in computer systems. Reluctant to return to London, he resigned from the Civil Service and in 1983 moved to Cotes Road in Barrow, where he spent much time gardening and consolidating the 2½ acre horse field at the rear of his garden into woodland. In 1984, hundreds of English trees were delivered under a council planting scheme and the grounds were developed.

Continuing working in the external relations office at the University until 2003, Arthur then took early retirement to nurse his wife, Gill, throughout her terminal cancer. Following her death, Arthur had always continued to write poetry and he attended an Arvon Foundation Creative Writing Course in 2004 which renewed his confidence as a poet. He busied himself in many aspects of community life and later married an old family friend, Julie.

He was involved in the Local Society; the Labour Party; Community Association and the WEA. He became Barrow's first Heritage Warden, Chair of the Village Plan Working Party and led a successful bid to the Heritage Lottery Fund, which has enabled several projects for Barrow, including several new publications and the Barrow Heritage Group Website. Throughout this time, he continued with his love of words and poetry, some samples of which can be seen in the Barrow Heritage Publication 'People & Places'.

Arthur was diagnosed with Motor Neurone Disease in 2007 which he accepted with characteristic courage, always maintaining his sense of humour, and also ensuring that his projects would be continued. Friends and poets set up a scheme to raise cash for the MND Society in his memory. The response was overwhelming and many contributions were received, including those from leading poets throughout the UK, resulting in a book of poetry 'Lifemarks', being published as a tribute to Arthur. Included in the 'Lifemark' collection was the following poem written by himself :-

Sleeping as we do, with the curtains open
The sun, moon and stars peer in
Even Orion drops by without being invited
Sleeping as we do, with the windows open
The sounds of trains, planes and cars pour in
They all seem delighted
We had not expected such attention
We had not meant to put ourselves on show
We merely thought to take and hold what we found good

And let all others go.

Arthur Gardner was a person who embraced life, loving to share his opinions and knowledge with others. He leaves an ongoing legacy to the village of Barrow-upon-Soar.

"Arthur was a generator, motivator, facilitator and an all-round lovely and loveable human being" – tribute by Jan Hind.